Located in the southern part of the island of Gozo, the village of Il-Munxar was formerly a small hamlet where farmers lived off the land that they ploughed. This community was integral to the nearby village of Ta’ Sannat but, in the early 1900s, new settlers established themselves in the area. Over the decades, the village kept expanding and can currently boasts a population of approximately 1,500 people. In the 1960s, archaeological excavations revealed the remains of a prehistoric temple known as Ta’ Marziena. The excavations also unveiled as a prehistoric wall and potteiy that indicate that the site has been inhabited for at least 5,000 years.

The name Il-Munxar derives from an Arabic verb meaning ‘to saw’ but the reason for this name is still unclear. Some scholars have suggested that it may originate from the shape of the promontoiy between Victoria valley and Sannat valley which looks like a long saw. The blue and white ?ag and coat of arms of the village replicates a saw blade. Il- Munxar was the last village on Gozo to become an autonomous parish in December 1957. A parish is a church vested with authority to govern all the filial churches within its established district and provide for all spiritual needs of the community living within its boundaries. The church of St Paul was built in 1921 on two and a half acres of land donated by a local family. A narrow road from Munxar leads to a winding, paved path that runs along the southern coast of the island heading to the highest points in Gozo, known as the Sanap Cliffs.

These limestone cliffs reach a maximum height of 137.5 metres. The cliffs drop sharply into the sea and offer spectacular views over Malta on the east and Xlendi harbour on the west. The cliffs also provide an ideal nesting place for seabirds including threatened bird species like the European storm petrel. 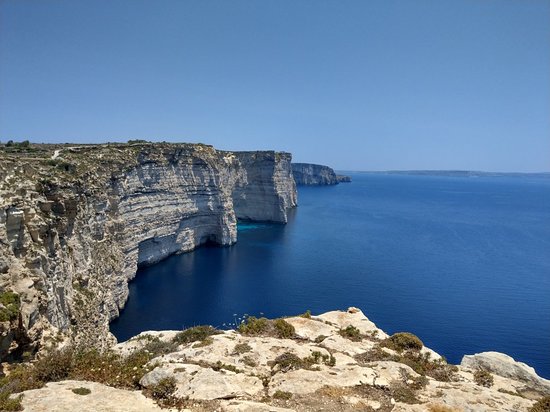