Two 16th century well-preserved public wash-houses built by the Knights of St John may be seen on either side of Spring Street in the village of Fontana. The larger one is locally known as the Ghajn il-Kbira meaning the ‘large spring’. The smaller one is Ghajn Bendu, ‘Bendu’s Spring’. Originally, there were 5 fresh-water springs running through Fontana’s valley but only two survived.

Spring water is channeled to these outlets from the Lunzjata Valley, close to the village of Kercem, through a series of ancient stone gutters that formed part of an old irrigation system. The arched shelters built over the springs were added in the 17th century to shelter laundresses from inclement weather. The Fontana wash-houses consist of a row of stone-cut basins with drainage holes. A constant ?ow of spring water feeds the basins through narrow stone channels.

A table-like structure in the center was meant for scrubbing. The bottom end of the large wash house is adorned with three coats-of-arms displaying Grand Master Gregorio Carafa’s magistracy, the government of Gozo, and the Azzopardi family who ?nanced the building of the shelter. Wash-houses have been around for at least 2,000 years; in ancient Rome they were known as fullonica because the soap they used was a clay-like substance known as fuller’s earth.

On the Maltese islands water shortage was always a problem. Some households had cisterns where they collected rain water. Not all households were furnished with cisterns and those who had would often run dry during persistent dry periods. Either way, the only alternative was to draw water directly from public fountains or springs. Clothes were washed once or twice a month. It was more convenient for housewives to wash their laundry at a public wash-house rather than carry heavy buckets of water all the way to their house. The wash-house also provided an opportunity for women to exchange gossip 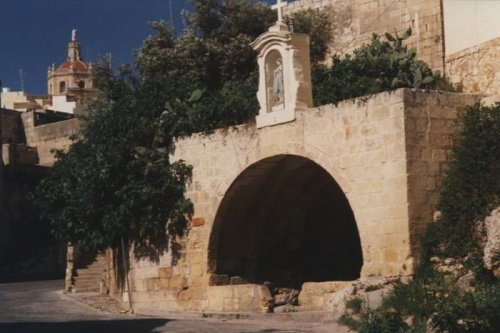 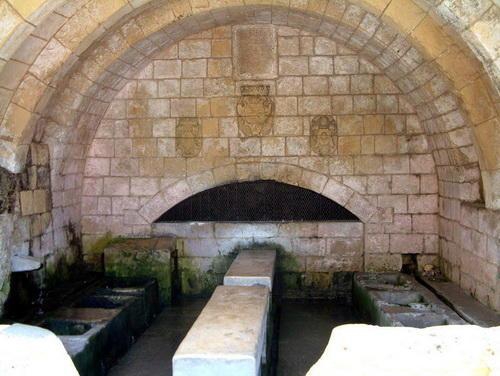